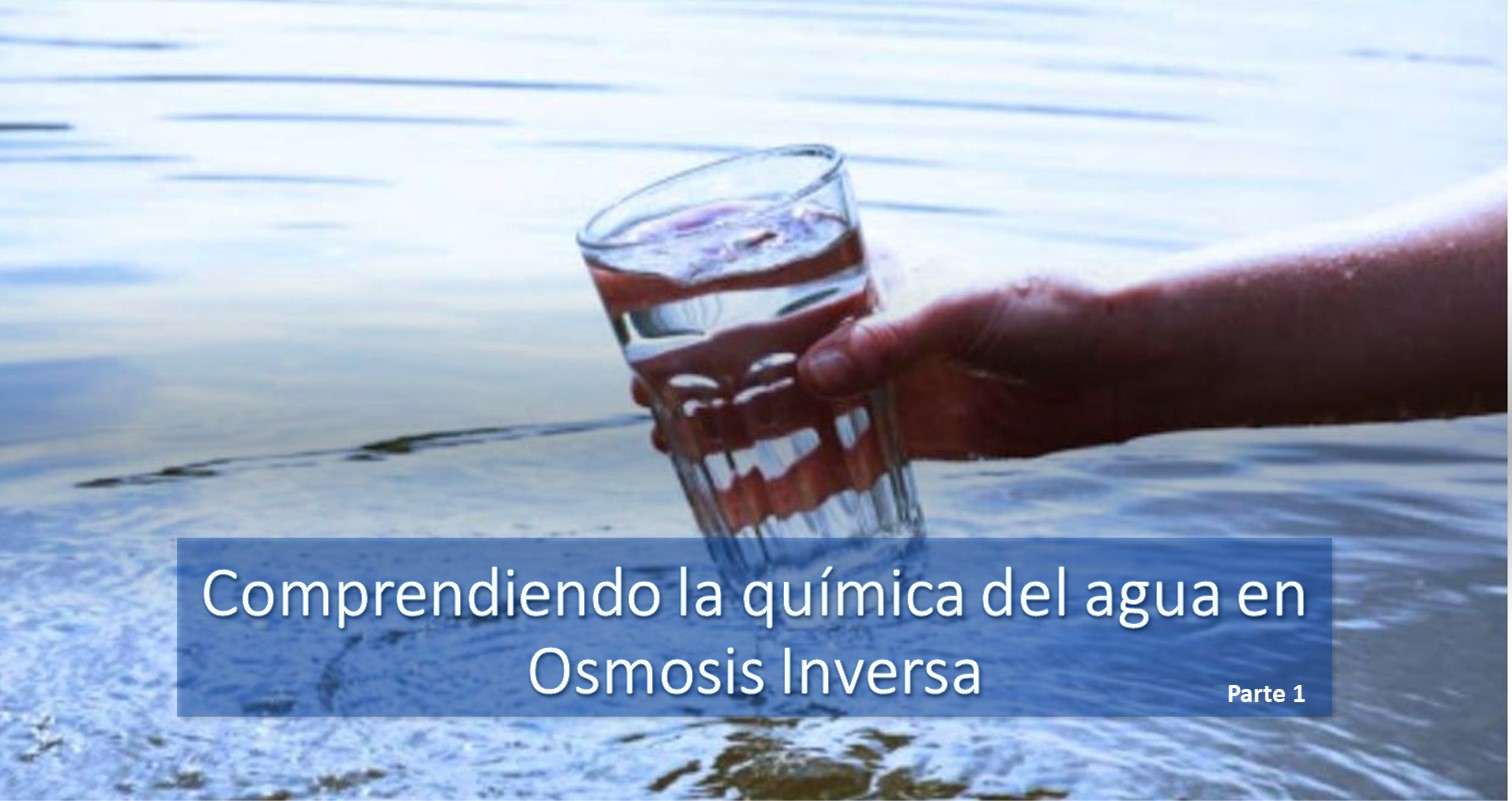 In order to correctly design and operate reverse osmosis membrane systems, it is necessary to consider the chemistry behind the water to be treated. Likewise, it is important to identify the main problems that may arise due to the nature of the water source. Here we will learn the most important parameters to consider before designing and while running this system, based on variables such as pH and temperature. If you have any questions about Reverse Osmosis Water Treatment, feel free to contact us.

Carbon dioxide reacts with water as carbonic acid and therefore is not considered part of alkalinity. As the graph above explains, carbon dioxide and bicarbonate are in equilibrium between pH 4.2 and 4.5 at the low end, and 8.2 to 8.4 at the high end.

When pH values are below 4.2 to 4.5, alkalinity is transformed into carbon dioxide, and at pH 8.2 to 8.4, all alkalinity is bicarbonate.

Taking the above into account when making pH adjustments in the feed water (unfiltered), water scaling can be modified, as well as reducing the rejection rates of CO2 in the permeate water (product water), which is highly recommended in reverse osmosis systems.

Alkalinity in water is determined through titration using two indicators: methyl orange with an endpoint at pH 4.5 and phenolphthalein at 8.3. The measure obtained with methyl orange is called total alkalinity or “M” endpoint, and the measure with phenolphthalein is known as “P” endpoint. OH− alkalinity can be calculated using the ratio of the “M” and “P” endpoints; and from the three (M, P and OH−), the concentrations of bicarbonates, carbonates and hydroxyl can be determined.

The presence of aluminum in water is rarely linked to the natural water source, and due to its low solubility, it is more common to find colloidal aluminum particles resulting from the impossibility of completely precipitating the flocs after clarification, which would generate colloidal scaling in the RO membranes, so the limit range for aluminum concentrations in the feed water is between 0.1 to 1 ppm.

The pH range where aluminum has the lowest solubility is between 5.5 and 7.5.

Ammonium salts are very water-soluble and do not cause scaling on osmosis membranes.

Depending on the pH, temperature and ionic strength, different levels of ionization can be reached, resulting in greater amounts of ammonium ion (NH4+) as seen in the following graph. 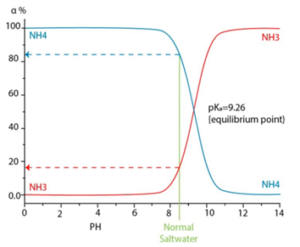 With high pH values, ammonia is found as a gas and it is not rejected by the membrane, and the same happens with carbon dioxide. Ammonium is not commonly found in well water sources since it is generally transformed by microbial activity into nitrites and later oxidized into nitrate ion, which is more common. Surface water sources can contain ammonia when contaminated by septic systems or by fertilizer used on crop fields.

Barium sulfate (BaSO4) has very low water solubility and can cause scale buildup in the last RO membranes. The solubility of barium sulfate lowers by increasing sulfate concentration and at low temperatures. Well water can contain barium values ranging from 0.05 to 0.2 ppm, so the analysis used must have the proper detection limit of up to 0.01 ppm (10 ppb). With the right anti-scaling agent, saturation values ​​between 100 and 6,000% can be kept under control.

When found as calcium bicarbonate, it is less water soluble and can cause scaling in the last RO membranes. To determine the scaling potential, we use the Langelier Saturation Index (LSI) for brackish waters and the Stiff-Davis Saturation Index (SDSI) for seawater.

Sea water can contain up to 5 ppm of boron and removing it is necessary for water purification, where it must have values lower than 0.5 ppm. Boron can be a monovalent anion as borate (H2BO3–) or as boric acid (H3BO3) depending on the pH of the water, as seen in the following graph.

Calcium, along with magnesium, is an important component for hardness in brackish water. Sulfate solubility is limited to 230% using an anti-scaling agent, and water solubility of calcium carbonate is limited to Langelier Saturation Index (LSI) values typically, with acceptable numbers between 1.8 and 2.5. The scaling potential of calcium carbonate is easily identifiable by the reaction it has with acids, which release carbon dioxide and can be seen as effervescence. 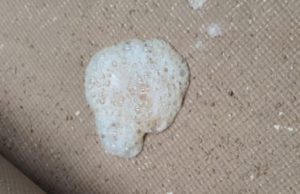 When carbon dioxide dissolves in water, it transforms into a weak carbonic acid (H2CO3).

Carbon dioxide concentration in water is determined indirectly by comparing the bicarbonate and pH concentrations, according to the graph shown before. From these values, the reverse osmosis design program can calculate the exact concentration of carbon dioxide.

Since carbon dioxide is a gas, it is not rejected by RO membranes, and its concentration will be the same in the feed, permeate and concentrate water.

Water solubility of calcium carbonate is low and can result in scale buildup for the last membranes of a RO system. It is calculated using the Langelier Saturation Index for brackish waters or the Stiff-Davis Index for seawater. The solubility tends to be lower with higher temperature and pH.

It is a non-specific test that measures the amount of carbon found in organic matter, expressed in single-digit ppm (parts per million) of carbon.

Since TOC volume only measures the amount of carbon in organic matter, the actual weight of the matter can be up to 3 times greater in natural surface waters.

An RO system rejects more than 99% of organic compounds with a molecular weight greater than 200.

As a general rule, the maximum values ​​to avoid organic scaling in natural waters are:

The solubility of chloride salts is high and does not result in scale buildup for RO systems. In seawater, chloride is the prevalent anion. Chloride anion is used to automatically balance an RO feed water analysis. The recommended upper limit for chloride in drinking water by the US EPA and the WHO is 250 ppm based on taste standards.

It is a measure of the ability of water to pass (transmit) an electric current due to the presence of charged ions, which makes it a suitable method to determine the level of ions in water indirectly.

For applications where permeate water conductivity is very low, measurements are required to be carried out on site to the RO permeate water since the levels of carbon dioxide vary when exposed to the atmosphere.

It is a non-specific test that measures the amount of oxygen consumed by bacteria and microorganisms for 5 days at 20° C to oxidize biodegradable organic matter and is expressed as ppm of oxygen. A high BOD value ​​increases RO membranes scaling, which may require more frequent cleaning and reduces their life cycle.

COD is a non-specific test that measures the amount of biodegradable and non-biodegradable organic matter and is expressed in mass of oxygen consumed to oxidize said organic matter. A high COD value ​​increases RO membranes scaling, which may require more frequent cleaning and reduces their life cycle.

Fluoride is naturally found at low levels in well waters, but it is typically added into community water systems in a concentration of up to 2.5 ppm to prevent dental decay.

Fluoride rejection by an RO membrane is pH dependent. It can reach 99% at high pH and below 50% at low pH since fluoride is in acid form.

Iron is a water pollutant that can be soluble as ferrous iron with two valence electrons (+2). In this state, it behaves similarly to the hardness of calcium or magnesium, meaning that it can be removed by softening agents, or be able to control its precipitation with dispersing agents. In ferric state, with three valence electrons (+3), manufacturers recommend values ​​lower than 0.05 ppm.

If all iron is in soluble ferrous form, iron levels can be as high as 0.5 ppm in the water feed, and tolerated if pH is less than 7.0 (although it is still recommended to use an iron dispersing agent).

When exposed to air, iron oxidizes into ferric, causing problems in RO systems. As long as it remains soluble, it can be treated with dispersing agents or removed with filters, softening or lime softening agents. Insoluble iron or ferric hydroxides, being colloidal, will cause scaling to the front end of the RO system.

Iron scaling can rapidly increase water feed pressure and the conductivity of the permeate water. In some cases, it can promote biological scaling by allowing iron-reducing microorganisms to build up and create a viscous film.

The Langelier Saturation Index is a calculation used to determine the scaling or corrosive potential in brackish waters from TDS (Total Dissolved Solids) and the saturation levels of calcium carbonate.

LSI is important in reverse osmosis chemistry since indicates the potential of calcium carbonate scaling.

The LSI value can be lowered by reducing pH levels by adding an acid (typically sulfuric or hydrochloric) into the RO feed water.

Similar to the LSI, this method determines the scaling or corrosive potential in seawater from TDS and the saturation levels of calcium carbonate.

Unlike the Langelier Index, the SDSI is related to the common ion strength dependent on dissolved solids for seawater and brackish water, which modifies salt solubility.

This website uses cookies to improve your experience while you navigate through the website. Out of these, the cookies that are categorized as necessary are stored on your browser as they are essential for the working of basic functionalities of the website. We also use third-party cookies that help us analyze and understand how you use this website. These cookies will be stored in your browser only with your consent. You also have the option to opt-out of these cookies. But opting out of some of these cookies may affect your browsing experience.
Necessary Always Enabled
Necessary cookies are absolutely essential for the website to function properly. This category only includes cookies that ensures basic functionalities and security features of the website. These cookies do not store any personal information.
Non-necessary
Any cookies that may not be particularly necessary for the website to function and is used specifically to collect user personal data via analytics, ads, other embedded contents are termed as non-necessary cookies. It is mandatory to procure user consent prior to running these cookies on your website.
SAVE & ACCEPT