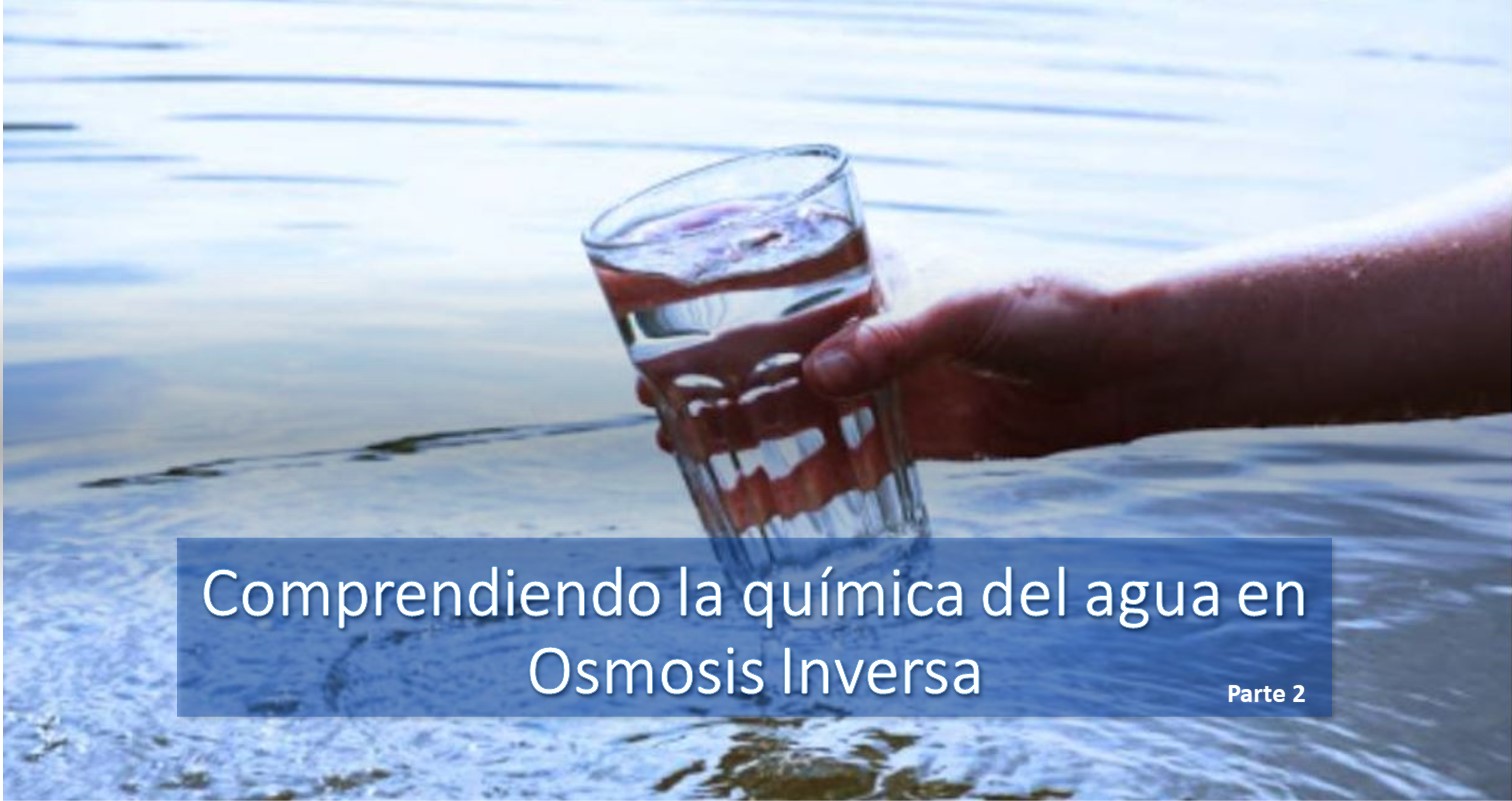 This article continues the previous installment of How to design a successful reverse osmosis system, which summarizes a few things to take into account depending on certain components and parameters found in the water, and their behavior when adequately designing and operating reverse osmosis membrane systems, where we covered letters “A” through “I.”

If you need any additional information related to what is being discussed here regarding Reverse Osmosis Water Treatment, do not hesitate to contact us.

This is a divalent cation that can make up one-third of the hardness of brackish water, and might be 4 to 5 times greater than the calcium in sea water. Due to the high solubility of magnesium salts, it does not lead to scale-related problems in reverse osmosis systems.

Manganese is a well and surface water pollutant. Just like iron, it can be found dissolved in the absence of oxidants. Once oxidized, it precipitates as manganese dioxide. Values greater than 0.05 ppm of manganese can contaminate reverse osmosis systems, which may be controlled by using the same type of antiscalants as those used for iron.

Just like gaseous ammonia and the ammonium ion, nitrate is a nitrogen-based ion. Nitrogen is introduced into the water due to the decomposition of animal or vegetable waste, septic systems or the runoff from agricultural fields where nitrogen is used as a nutrient for crops. The concentration of nitrates in drinking water is limited due to the negative effect they have in the transportation of oxygen in the bloodstream.

This can be defined as the pressure that needs to be applied to a solution to stop the net flow of solvent through a semipermeable membrane. It is one of the four colligative properties of solutions; in other words, the properties that depend on the concentration of dissolved particles such as a decrease in the freezing temperature and an increase of the boiling temperature. 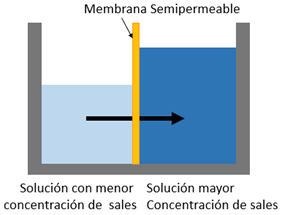 In water, the pH is fundamental in determining the levels of equilibrium for the concentration of carbon dioxide, bicarbonates, carbonates and the hydroxyl ion.

In reverse osmosis systems, the rejection pH tends to be greater than the feed pH due to the concentration of carbonate ions and bicarbonates; the programs of osmosis membrane manufacturers allow for estimating the pH value at each stage of the system, as well as for seeing the effect of reducing the pH with acid that is generally used to reduce the Langelier saturation index and reduce the scaling propensity of the water.

The pH value of the feed water and reject water has an effect on the solubility and fouling potential of silica, aluminum and organic products. And its variations have an effect on the specific rejection of certain ions such as fluorides, boron and silica.

This is a monovalent cation found in concentrations lower than those of sodium. Its salts are highly soluble and pose no risk to osmosis systems.

This is an empirical test developed for membrane-based systems, which measures the fouling rate of a paper filter of 0.45 microns with suspended and colloidal particles in the feed water. This test determines the time that is necessary to filter a specified feed volume at a constant 30 psi at time=zero and then after 5 minutes, 10 minutes and 15 minutes of continuous filtration. If the SDI test is only limited to 5 or 10 minutes, the user can expect a high level of fouling for the RO. Osmosis membrane manufacturers limit the maximum SDI value for the purposes of component warranty.

The chemistry of silica is a complex subject and somewhat unpredictable. Just as the TOC points to the total organic concentration (as carbon) without specifying what the organic compounds are, the silica points to the total concentration of silicon (as silica) without specifying what the silicon compounds are. The “Total Silica” content of water is composed of “Reactive silica” and “Colloidal silica.”

Reactive silica (e.g., SiO4 silicates) is dissolved silica that is slightly ionized and has not been polymerized into a long chain. Reactive silica is the form of silica that is used in RO projection programs, and even though it has anionic characteristics, it is not counted as an anion in terms of the equilibrium in a water analysis, but it is however included in the total dissolved solids (TDS) count.

Colloidal silica is polymerized silica that behaves more as a solid than as a dissolved ion. It can be removed by a reverse osmosis system, but it will lead to colloidal fouling issues.

The solubility of reactive silica is typically limited to 200-300% through the use of a silica dispersant, exceeding it saturation level may result in the polymerization of the silica. 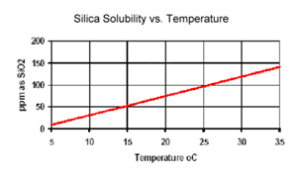 The solubility of reactive silica is directly proportional to the temperature. 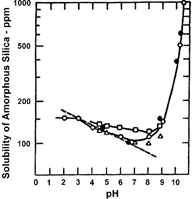 The silica rejection is sensitive to the pH, with the rejection increasing at a more basic pH, since reactive silica exists more as a salt than as an acid.

This is a monovalent cation, its salts are highly soluble and cause no RO scale issues. In sea water, sodium is the prevalent cation. Sodium is the cation used to balance feed water analyses in reverse osmosis system simulations.

This is a divalent cation which, when forming strontium sulfate, has a low solubility and high chances of causing scale issues in the final stages of reverse osmosis systems. The solubility of strontium sulfate is decreased with higher concentrations of sulfates and at low temperatures. Strontium can be found in certain well waters alongside lead minerals in concentrations under 15 ppm.

This is a divalent anion. Due to the low solubility of calcium sulfate, barium sulfate and strontium sulfate, it can lead to scaling in the final stages of reverse osmosis systems. The solubility of these salts is even lower at low temperatures. The recommended upper limit for sulfate in drinking water is 250 ppm due to taste problems.

The inorganic solids that remain in the water after the filtration of colloids and suspended solids are called total dissolved solids, stated in mg/L or ppm. For reverse osmosis systems calculations, it is determined based on the sum of cations, anions and silica, with each of these ions being stated in ppm for the ion.

In RO design projections, the feed water or permeate TDS can be estimated based on conductivity, with a conversion factor that can range between 0.5 and 0.8 depending on the type of water.

This is a critical design factor that has significant effects on the pressure requirements for the feed pump, in the equilibrium of the water flow between stages, in the permeating quality and in the solubility of the salts – especially those that have a limited solubility. A suitable approach is to indicate that a 5.5°C decrease in the inflow temperature increases the required pumping pressure by 15%.

Additionally, the permeated flow for each stage is also affected by temperature: when temperature increases, the amount of permeate increases for the initial stages, which results in a reduction in the water flow available for permeating at the final stages. This hydraulic imbalance is reduced by decreasing the temperature.

At higher temperatures, the flow of salt increases due to the higher mobility of the ions through the membrane.

Turbidity measures the transparency lost by water or any colorless liquid due to the presence of particles in suspension and that, due to their colloidal nature, do not sediment easily, leading to a cloudy or dirty aspect.

Turbidity is determined by measuring the relative amount of light that passes through the liquid, and is reported as Nephelometric Turbidity Units (NTU). For the purposes of reverse osmosis component warranties, it can be lower than 0.5 NTU in the feed water.

In a reverse osmosis system with 75% recovery, turbidity generating solids will increase by a factor of 4, meaning that a turbidity of 0.5 NTU at the feed will become a 2 NTU turbidity at the final stages. This concentration effect shows the effect that a supposedly low turbidity in drinking water –such as 1 or 2 NTU– can have in reverse osmosis systems, and should be taken into account as a parameter that needs to be controlled in pretreatment systems.

This website uses cookies to improve your experience while you navigate through the website. Out of these, the cookies that are categorized as necessary are stored on your browser as they are essential for the working of basic functionalities of the website. We also use third-party cookies that help us analyze and understand how you use this website. These cookies will be stored in your browser only with your consent. You also have the option to opt-out of these cookies. But opting out of some of these cookies may affect your browsing experience.
Necessary Always Enabled
Necessary cookies are absolutely essential for the website to function properly. This category only includes cookies that ensures basic functionalities and security features of the website. These cookies do not store any personal information.
Non-necessary
Any cookies that may not be particularly necessary for the website to function and is used specifically to collect user personal data via analytics, ads, other embedded contents are termed as non-necessary cookies. It is mandatory to procure user consent prior to running these cookies on your website.
SAVE & ACCEPT